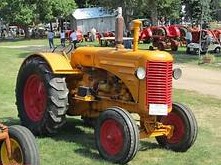 Eldon L. Etter, age 82 of Zim passed away peacefully with family by his side on December 17, 2021 in his home.  He was born January 28,1939 in Becker County the son of Paul and Bernice (Kimball) Etter, spent his childhood years in Menahga, and was a graduate of Cherry High School, Class of 1957. Eldon married Barbara Thiel on April 5, 1986 at Faith United Lutheran Church in Iron.

Eldon was a Brick Mason by trade, he was a 50-Year Member of Bricklayers and Allied Craftworkers Local Union 1 MN/ND.  He loved his work and admired every building or basement he worked on.  Eldon enjoyed going to work so he could banter with the crew he worked with.  He was also a farmer at heart, but he had to deal with the uncertainty of weather and breakdowns, which at times, stressed him to the max but it always got done.  He enjoyed and collected Minneapolis Moline tractors, loved looking at them, especially after Ward and Bryan restored them, they turned out beautiful.

Eldon was also a story teller and loved telling jokes, enjoyed making people laugh, the “yah yah” man, his one- liners sometimes caused eye rolling…  time to go Eldon.  He was a people person, loved to visit, drinking one cup of coffee or a pot after a couple of hours.  He loved his bismarks, donuts and sweets.

He loved his grandchildren and attended many of their activities, taught them how to drive anything with a motor on it and they loved him.

He was preceded in death by his parents; siblings: Melvin and Camille and two brothers in infancy: Merle Patrick and Edward.

The Memorial Service will be held on at 11:00 a.m. Saturday, January 22, 2022 at Faith United Lutheran Church in Iron. Pastor Christine Kadelbach will officiate. A gathering time for family and friends will begin one hour prior to the service at the church. Spring Inurnment will take place in the Forbes Cemetery.

Memorials are preferred and may be directed to Faith United Lutheran Church in Iron.

The Etter Family wishes to thank the Essentia East Range Hospice Team for their care and concern.

To send flowers to the family or plant a tree in memory of Eldon Leo Etter, please visit our floral store.